Looking back into the NAMM Show

by TIERRA Audio in News

If we had to describe the NAMM Show 2019 in just a few words, we would probably say it was crazy, but in an inspiring and positive way! We set off on Monday 21st, looking forward to showing off our new range of products in the biggest fair in the world. We were confident that people were going to like them. We knew that our BMI technology was something unseen before in the industry. That the look of our devices was also disruptive and that it merged a classic and modern concept in a beautiful way.

But what means the most to us is that our users love what we are doing.

So… what were the results?

The NAMM Show 2019 was a huge success for TIERRA Audio. Not only did we meet some of the most influential people in the music industry people, but the feedback we received went beyond even our wildest dreams.

Some comments we got…

During Media Preview Day, and the following days at the NAMM Show, we got to speak to several journalists and music experts. Here you can find some of the videos where we’re featured so far and learn more about what we have to offer:

We had the pleasure of welcoming amazing people to our stand! And best of all… they were impressed with our products and wanted to share it with the world!

Some of them were: MusicTech, Bboy Tech Report, Sounds and Gear, Afsheen Salmani, among many others! 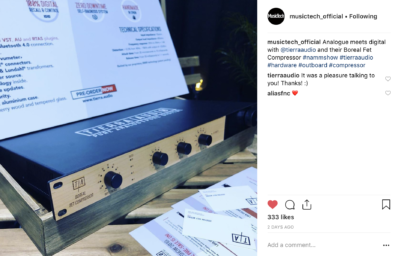 Some experts we met…

Rafael Sardina:13-time Grammy-winner, producer/mixer/engineer, Rafael Sardina, came to visit us at our stand! It was incredibly exciting and he liked everything we saw very much. We are now getting everything ready to send him one of our devices so that he can try them out and make his magic happen at his studio in L.A.

Afsheen Salmani: Not only he has worked with artists such as Madonna, Chris Brown and Lindsay Sterling, but he also produces his own music! We had the pleasure of having him at our stand and were then invited to visit him at his studio in L.A so that he could test our devices. He immediately recognized a warm sound in our Lava Preamp and gave us incredibly positive feedback! We are looking forward to doing things together with him.

Armando Ávila: Grammy award winner, Armando Ávila, paid us a visit and was very impressed with how we’ve managed to merge the analog and the digital world. He took a look at our Lava Preamp and Boreal FET Compressor and is looking forward to trying them out! It was amazing for us to meet and receive feedback from such an amazing producer. Some of the people he has worked with include Luis Fonsi, La Quinta Estación and Ana Torroja, among many others.

Armando Ávila at Tierra Audio’s stand during the NAMM Show

Tato Latorre: Known for his versatility when it comes to producing, Tato Latorre visited us and gave us incredible feedback on o,r brand new just-launched equipment. He has worked with artists such as Funambulista, Maldita Nerea and Antonio Orozco, among others, and will soon be playing with our devices in his studio in Spain.

Tato Latorre at Tierra Audio’s stand during the NAMM Show

DJ Nelson: This Puerto Rican DJ and record producer has played a significant role in the development and popularization of reggaeton. He learnt about the features of our equipment and not only does he wants to try it out, but he wants his hands on our Icicle Equalizer ASAP(available mid 2019)

Dj Nelson at Tierra Audio’s stand during the NAMM Show

Juan de Dios Martín: We emailed him before getting there, and from the very beginning he seemed intrigued by our proposal. He stopped by our stand and saved our butts by lending us a sound card (ours had a bit of an accident). He then gave us super positive feedback on our equipment. We are delighted that he liked everything he saw and can’t wait for him to try it out!

To sum up… NAMM Winter Show 2019 exceeded our expectations and opened lots of new doors for us. We can’t wait to collaborate with all the amazing people we met and keep on growing and reinventing the future of audio!